Today on the Fantastic Blog Hop Tour we have a regular on board, Karen Vaughan.  Author of Dead Comic Standing, Over Her Dead Body and Daytona Dead and new pod caster on the Red River Writers Network.  Let’s see if we can find out a little more about this very talented woman.

1. Are you a fan of the genre that you write in?

Karen: Yes I grew up reading Hardy boys and Nancy Drew. I love light mystery like what I write and romantic suspense along with thrillers and crime drama.

2. Are you a pen and paper author or do you use a computer to write?

Karen: I go from whats in my head to the laptop. However there are times I do take notes and add them to the story.

3. If you couldn’t write what would you be doing instead?

Karen: Welfare bum with tin cup? No I would probably do some kind of work to help the less fortunate.

4. What about this business surprised you the most?

Karen: How much the authors support each other. I thought it would be more cut-throat and competitive.

Karen: Yes, not religiously but when an idea comes to mind I do blog about it.

6. Are you on social media?

Karen: Do you enjoy it? Yes I live on Facebook, the others not so much.

7. The house is on fire, which do you save, your laptop or your book collection?

8. The publishing industry is changing, do you think this is good or bad time for authors?

Karen: Yes good for independent authors to forge their own path and not depend on the big houses. We do have to do our own marketing but there is the opportunity to learn so much.

9. How do you promote your books?

Karen: Social media like facebook and Goodreads and word of mouth. I also hired the services of a publicist for 2 months and it’s been helpful.

10. Your editor says you have to kill a character, which one would get the ax?

Karen: Maybe Gibbons that would create a conflict for Laura as they were good friends and to have to get used to a new detective who might not be so nice. 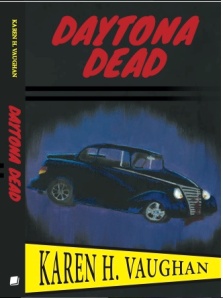 The cub reporter  for The Daytona Beach News journal Callie Springford sits down with convicted police officer to get the straight skinny on what went down during the Killer T. Ford Roadkill rampage.

WHY ARE YOU IN JAIL?

I let my brother in-law Killer T. Ford talk me into being his eyes and ears at the police station. I was privy to a lot of info that I should have told my supervisors about with regards to his involvement in the identity theft ring and the hit and runs.

WHAT MADE YOU DECIDE TO COME CLEAN?

My wife Annabelle made me see that her brother Duane aka Killer T. was nothing but trouble and he could very easily drag me down the same dark path to hell that he was going on. I decided my life with her was more important than keeping that spoiled little prima donna happy. I had tremendous guilt over the whole break in thing at the Fitz hotel room, getting Rueben to nail Cronk, and getting the kid killed by that bastard.  I might be doing time here but I can stand a bit taller having down the right thing.

WHAT WAS YOUR CAREER BEFORE THAT? I was a desk clerk at the local police station as I had been demoted from my job in Forensics up in Dade County.

ARE YOU EASILY INFLUENCED BY OTHERS?

Unfortunately I would have to say yes. Killer T kind of bullied me into doing a lot of dirty things including trashing that nice couples room.

IF YOU COULD CHANGE ONE THING IN YOUR LIFE WHAT WOULD IT BE? Not be such a wuss.

COUNTRY MUSIC OR ROCK?  Depends on my mood I like either

DO YOU HAVE A NICK NAME? At work they called me Barney Fife now the guys in here call me Dead Meat

FAVORITE COLOUR? Definitely not orange.   Hey do you think this jumpsuit makes me look fat?

WHAT ARE YOU GOING TO DO WHEN YOU GET OUT?  I am taking computer courses so maybe I can get a job at Best Buy when I get out.

DO YOU HAVE REGRETS?  Yes definitely and if I could I would undo all the things I did to hurt innocent people I would do it in a minute.

IF YOU COULD GIVE A ROOKIE COP ONE PIECE OF ADVICE WHAT WOULD IT BE? Stick with your principles and don’t let the lure of easy money make you do stupid things.

Karen Vaughan lives in Peterborough Ontario with her husband Jim and a four legged off spring named Sugar. She is the mom of a 22 year old daughter and four grown step children and a 2 1/2 year old grandson named Ike. DEAD COMIC STANDING is her second novel. Her first novel DEAD ON ARRIVAL garnered praise from friends, family and online gamers.  She also enjoys doing crafts and other hobbies. Her latest book is called OVER HER DEAD BODY is the second book to DEAD ON ARRIVAL. DAYTONA DEAD is the third in that series which is soon to be released.

2 thoughts on “10 Questions and More with Author Karen Vaughan”

My YA Novel Hag