Yesterday, I interviewed Karen H. Vaughan for the Fantastic Blog Hop Tour and today, I’ll be giving you a peek into her latest book, “Daytona Dead.”  For the next few weeks I’ll be interviewing and sharing excerpts with you from some of the most amazing authors so stay tuned!

Plans for the next day included getting some of our pictures saved on a CD, so I could clear the card in my camera. So I figured I might as well develop the ones from Lou’s camera.  I was at a Kodak kiosk doing just that, when I felt the hair on the back of my neck prick up, so I whipped around to find the creepy cop behind me.

“Ok, this is getting old really fast. Do you have an odd fixation with following tourists around? Or are you just being a jerk?”

“Mrs. Fitz, dear, no need for a meltdown. I just happen to be at the same photo kiosk as you “

“Oh my, someone is paranoid.” he laughed, “Maybe you really are guilty of that guy’s murder and used the road kill scenario as a cover up. Maybe, you staged it to divert attention. I may have to take my thoughts on this to the detective on the case.”

People were staring at us and backing away out of the store. The police officer was in his civvies and couldn’t do anything at that point.  He was grinning evilly, thinking he was getting the better of me.

I stood straight up, “Too late Fife, we’ve been cleared of all charges so don’t even go there.”

His weasel-like face turned bright red, “Quit calling me Fife, my first name isn’t even Barney! It’s Dave, Dave Meecham. With that he turned and stomped away from the kiosk.

Okay, so now my would-be stalker had a name, should I need to use it?  I continued to copy the photos from my card and printed off the ones from Lou’s SIM card.  I went to pay for my pictures and the clerk looked at me oddly.

“Um, six dollars.” She was clearly rattled by clash with the creepazoid.

It’s okay, dear, I’m not going to rob or kill ya. There’s no need to be nervous. My friend who just left is highly delusional…thinks he’s a cop or something. Most people have a thing for FBI or the CIA. He just wants to be at home in Mayberry with Andy, Aunt Bea and Opie”

The counter clerk laughed, took my money and moved on. I walked out with my photos and CD and Lou’s hard copies.

When I got back to the hotel I was still angry at the nerve of Dave Meecham implying we still might be responsible for Lou’s death.  This made me angrier as no one should be pissed off on their honeymoon. What did the little dip wad know anyway. He had been at the scene and saw the condition of Lou’s body. In my shock I hadn’t even realized that Lou had been shot after he was killed by the car. Maybe one of those guys in Lou’s pictures was Meecham.  I shook my head. I was going to turn what I had over to the authorities and back way off. I was on a mission to enjoy myself with Gerry, not get dragged into a homicidal mess. 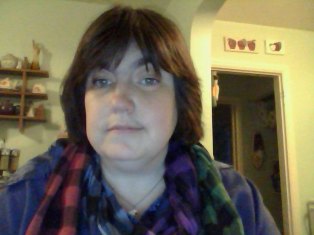 Karen Vaughan lives in Peterborough Ontario with her husband Jim and a four legged off spring named Sugar. She is the mom of a 22 year old daughter and four grown step children and a 2 1/2 year old grandson named Ike. DEAD COMIC STANDING is her second novel. Her first novel DEAD ON ARRIVAL garnered praise from friends, family and online gamers.  She also enjoys doing crafts and other hobbies. Her latest book is called OVER HER DEAD BODY is the second book to DEAD ON ARRIVAL. DAYTONA DEAD is the third in that series which is soon to be released.

2 thoughts on “An Excerpt From Daytona Dead By Karen Vaughan”