Today on our tour, we meet Ruth Davis Hays an author whom I’ve actually become a fan of.  If you want to check out some of her work you can here.  Her books The Convergence and The Dawnstone Tales are from the Jorthus Series and can be found on Amazon and at her website. 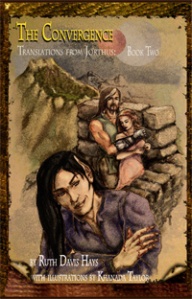 1. Are you a fan of the genre that you write in? I do enjoy fantasy/sci-fi movies and books. They can be either brain candy or poignant allegory.

2. Are you a pen and paper author or do you use a computer to write? I use both. It depends on where I am when the idea strikes. Occasionally, I end up scribbling on napkins.

3. If you couldn’t write, what would you be doing instead? I also enjoy designing costumes, especially historical ones.

4. What about this business surprised you the most? How difficult it is to summarize my stories.

5. Do you blog? Not on a regular basis, although I know that I should.

7. The house is on fire, which do you save, your laptop or your book collection? I would probably grab my laptop because my book collection can be replaced.

8. The publishing industry is changing, do you think this is a good or bad time for authors? While it is easier to get ideas out to the public through self publishing, it is harder to be taken seriously if you do utilize this path. It seems that the need for brick and mortar stores is shrinking, as is the demand for physical books. Ebooks can be handy, but it is hard to replace the thrill of seeing or smelling a printed page with your words on it.

9. How do you promote your books? I have a difficult time with self promotion, but blog interviews, such as this, help.

10. Your editor says you have to kill a character, which one would get the ax? All of them! (maniacal laughter) Is that over the top? To answer that with more seriousness, I would say that it would depend on if I needed the character for the storyline’s advancement. If I can transfer their job to another character, then almost any of them would be ax fodder.

Excerpt from Translations from Jorthus:  The Excursion – by Ruth Davis Hays 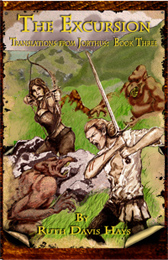 Dharromar laid back, staring at the ceiling, feeling Lylith’s warm, smooth body next to him and cursed himself. He had surrendered to her every whim and curiosity. And, in doing so, had lost himself in the passion. At one point, he almost told her the truth of why he was here with her. That would have been a costly mistake.

The woman had taken him by surprise with her intensity and her unselfish, unconditional acceptance. He had never in his life felt as he had with her. She made his heart tremble.

Their lovemaking had been so intense that tears stung him and he was left feeling shocked, empty. But, it was a pleasurable emptiness, not the coldness that he was used to feeling.

He stretched out his long body, hearing a few snaps and pops. The trust he saw in her eyes told him what he needed to know. If he kept her as contented as a fat cat, she would follow him anywhere.

This job might prove easier than I had originally thought. Definitely more pleasurable.

Putting on his most tender smile, he rolled to face Lylith. The blanket draped teasingly over her curvaceous figure. He could not rip his eyes from her. Her face rested in gentle happiness, a slight smile on her lips. Reaching over, he touched the wild flame of her hair as the morning sun made it dance with life. Her eyes opened slowly, revealing the lavender orbs beneath dark lashes. Her smile warmed him.

“You didn’t tell me you were virgin.” He scolded in a gentle tone. “I would have been gentler with you had I known.”

“I didn’t think it important.” Lylith purred. “I’m happy with the result, aren’t you?”

“Very happy, love.” He ran his hand softly down her pale arm. His eye followed the movement, noting the absurd contrast of his dark gray nails against her creamy skin.

“What is that on your arm?” she asked with all the innocence of a child.

He glanced at the light blue-green markings on his right forearm. “It’s a tattoo. Have you never seen one before?”

“No.” She watched it with sleepy fascination. “I’d never even seen a man’s body before either. Do most men have tattoos?”

“I suppose some do. It’s usually a symbol of something that they don’t want to forget.”

“Mmm.” She closed her eyes and smiled. That seemed to satisfy her, and she did not ask anything more of his guild symbol. Her mind drifted onto other topics.

She was quietly musing on something when he suddenly asked her, “Why did you choose me?”

“Hmm?” Lylith roused herself from her thoughts. “Choose you?”

A half smile played across his face. “Yes. Usually when a woman chooses to open herself to a man in such a private fashion for the first time, there is a reason… sometimes a very special reason that she picks him.”

Lylith shrugged and smiled shyly at him. “I liked your eyes.”

That was all she had to offer and he nodded, willing to accept that simple of a reason…

Ruth Davis Hays has been a stay-at-home mom, a writer, a costumer, and a data entry clerk. Not all at the same time, of course.

A Florida native, she was born in Jacksonville and graduated with a BA from Florida State University, School of Theatre. Having a love of fantasy from an early age, she took inspiration from anywhere; staring at a picture, the clouds in the sky, or walking down her grandmother’s driveway. Studying theatre and humanities since high school, she and her friend Khanada would write short stories to entertain each other.

When she moved to Orlando with her husband, Ruth worked in the Costuming Department at Universal Orlando for four years before leaving to work as a data entry operator with Harcourt Publishing. Deciding to stay at home with her new son, she freelanced on a research project for Wizards of the Coast. Later, helping on independent films such as The Last Will and Legend of the Red Reaper, she had the fun of being an extra as well as stretching her artistic wings behind the scenes. She was allowed to design and create individual costumes for some of the lead characters on the upcoming Legend of the Red Reaper (and got to die in it, too!).

During all these adventures, she spent her spare time writing a few more adventures down and produced two fantasy novels based on fictional worlds that had infected her brain in college. The series, Translations from Jorthus, is her chosen place for mental vacations. She tries to visit there as often as she can; bringing back tidbits that may entertain the hearts of others. Her books, The Dawnstone Tale and The Convergence, introduce the readers to an idyllic world of elemental magic and fairytale creatures, then plunges them into bigotry, betrayals, and war. Just an average, relaxing afternoon, right?  The third book in the cycle, The Excursion is in post-production and number four, The Illusion where many loose ends get tied up and gagged, will be done (hopefully) later this year.