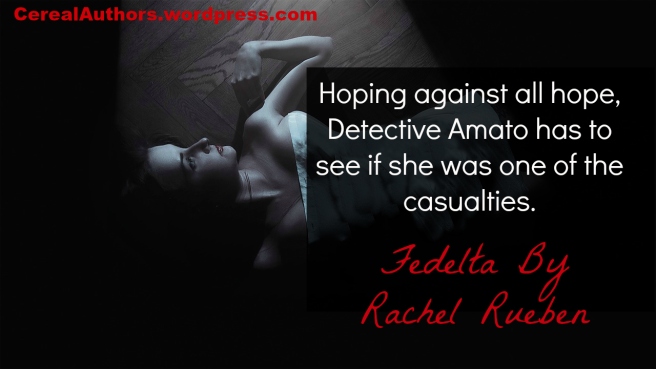 Detective Amato arrived at Mira’s Cafe to a gruesome scene.  Someone from the forensics team handed him a pair of surgical booties to slip on his shoes with the warning, “Watch out Amato, it’s a massacre.”

Making his way past the crime scene tape, he entered the café and saw bodies laying everywhere.  Careful not to touch any blood on the floor Amato, skillfully, moved across the room.  As he scanned the floor, he found what he was looking for.  Wiping his tired face with his hand, he let out a sigh.  “Ah, Cassie what the hell were you thinking?” he said to himself as he knelt down next to her body.

As a tear rolled down his cheek, he couldn’t help but look at her expressionless face staring at the ceiling.  It broke his heart, he and Cassandra had a past and though it was a convoluted one, it got real more than once.  It was the main reason his boss wanted him off the case.  He was getting too close to Armand Amatorè and Dominic Fenetti and his superiors were concerned.  He was the only cop in the history of law enforcement that managed to penetrate the inner circle of the Cosimo crime family and lived to tell the tale.  In the process, he crossed a lot of professional lines and nearly lost his badge because of it.

As the darkness from his past threatened to overtake him during this awful task, he saw what looked like movement.  Thinking he was just having a nervous breakdown, he blinked his eyes and looked again.  It was no figment of his imagination, Cassie was breathing! “Gotta a live one here!” Amato yelled.  Immediately all of the officers jumped into action, and grabbed a first aid kit while another called for an ambulance.

Within minutes Cassie was on her way to the hospital and Detective Amato was left to deal with the Cosimo crew alone.  He knew what he had to do and after he wrapped up the crime scene Amato got in his unmarked car, as he turned the key in the ignition, he heard his supervisor say, “John, you better not be doing what I think you are.”  Looking him dead in the eye, Amato said, “Don’t worry bout it, I got this.”

Though it was pointless, his super warned him nonetheless, “This time it was the girl, next time, they’ll be gunning for you.”  Shrugging his shoulders, Amato simply pulled away and went to meet up with Dominic Fennetti to finish this once and for all.

Tonight 100 years of mafia history was going to be wiped out and the shockwaves were going to be felt everywhere from the cells in Rikers to the Mayor’s office.

Rachel Rueben is author of the bestselling YA novel “Hag” and “The Eternal Bond Series” both available on Wattpad. To keep up with Rachel, you can sign up for her frighteningly entertaining newsletter here.